This website or third-party tools used in it uses cookies useful for the proper functioning of the site and for the purposes described in the cookie policy. If you want to learn more or opt out of all or some cookies, see the cookie policy By closing this banner, scrolling this page, clicking on a link or continuing navigation in any other way, you consent to the use of cookies. Accept

Rollers with a flap display releasing digits, solid, crisp, precise, minute by minute, without hands to read, enclosed by a distinctive shape and design have become an icon of the Made in Italy label all over the world.

The stylistic digit of Solari for over 50 years. 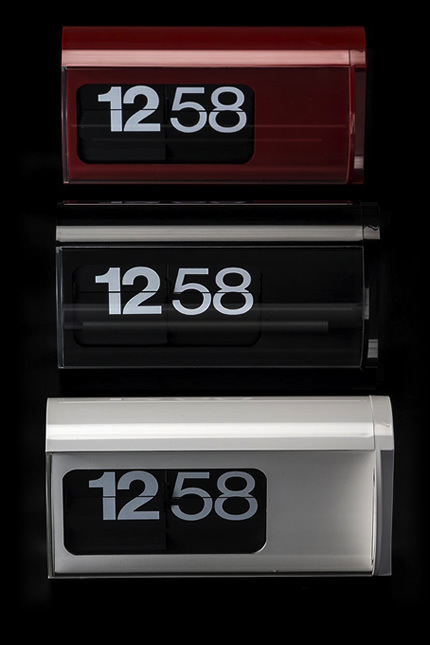 From a product to a cult object

The first electromechanical clock design with digits on a flap display (Cifra 5) was invented by Remigio Solari and developed by architect Gino Valle. It received the "Golden Compass" prize in 1956.
From that first product, a true family of clocks was born of which Cifra 3 represents the highest expression of beauty and functionality combined.

The communication aspect of the product is the key to the success of its design, a perfect balance of form, size, ease of viewing, the relationship between characters and color.
The design of Cifra 3 is born of that aesthetic conception in which the basic form and instantly recognizable cylinder becomes the perfect container for the framework and for the rotary motion of the vanes.

Strictly white digits on black background.
The lettering of the numbers has a different font for hours and minutes: it was designed by Massimo Vignelli of the Unimark International studio (Noorda - Vignelli) in the late '60s and uses the Helvetica font with small optical changes.

Each picture taken portrays the vanes of Cifra 3 on 12:58: a precise choice, chosen by Valle and still respected so that in every iconographic representation Solarilinea design clocks are ideally synchronized.

Architect, designer and painter, Gino Valle (Udine, 1923-2003) did not want to create simple objects, but was interested in their relationship with man, their power of communication, how they modified the environment and the space in which they were placed.
The key aspect of architecture is that it defines a space, builds a perceptual and sensitive experience. Just like the objects that Valle designed.

Valle began working with Solari in 1954 for the electromechanical digit-releasing clock design, Cifra 5, developed with his sister Nani Valle, John Myer and graphic artist Michele Provinciali and awarded the Golden Compass 1956: 4 vanes of 10 numbers to compose all hours of the day.
With the help of Belgian inventor John Myer, Valle managed to get the roller of 40 horizontal vanes that contains numbers and letters (patented in 1966) and at the end of the 60s he created Cifra 3, the smallest of direct-reading clocks.

Valle's second Golden Compass came in 1962 with a remote alphanumeric indicator for airports and railway stations "for the intensity of the engineering design solution that results in an extraordinary simplicity and sign-aesthetic evidence".
Installed in Terminal TWA of the JFK airport in New York,  Valle’s  remote indicator was enclosed by a distinctive oval shell designed by Eero Saarinen completely covered with white tiles made by the famous mosaic artists of the school of Spilimbergo (PN).

If design for Valle was the language of objects, Cifra 3 is its ultimate expression: it marks time and narrates its incessant flow through the movement of the vanes.

“I do not make objects: I establish relationships. I build relationships and define environmental flows in terms of time, as a before, a during and an after. It is not so much the interweavings that count as it is the succession of spaces, relationships, transformations, rituals of transition.” 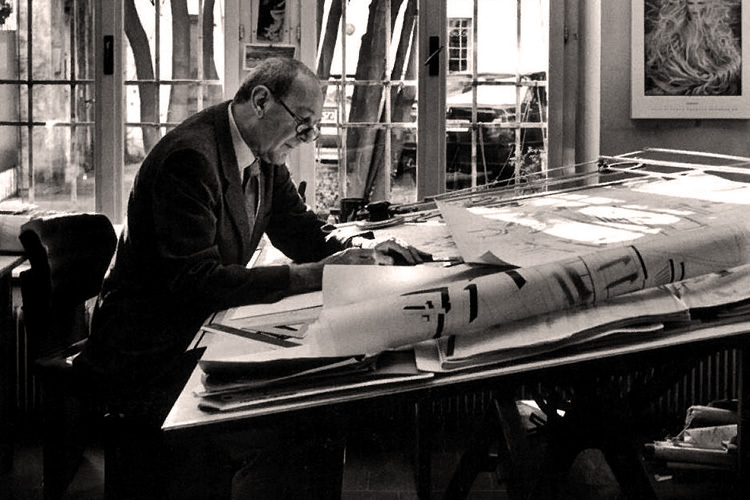 “I've never been attracted to objects. Rather I was amused by the idea of designing them and then eliminating them to spare them from the plays of style; I preferred to focus on their communicative aspect.
Reset everything, make things invisible, objects that could be found here and there, or that I could put everywhere.” 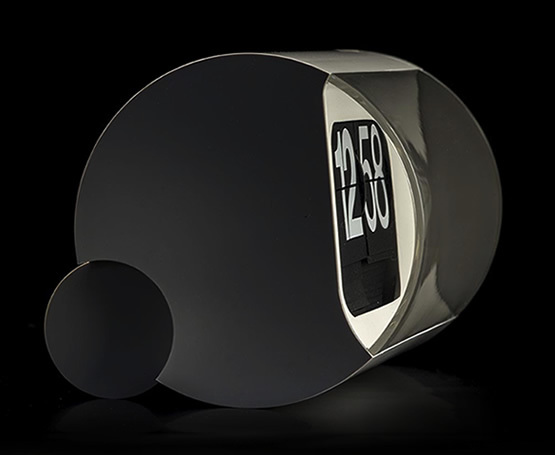 The technology of roller vanes enclosed in Figure 3 has revolutionized the way we view time and entered not only in homes and offices, but in the big stations, in public places and at airports around the world.

The heart of the technology, formed by the motor, by the mechanical part and by the vane rollers, is fixed to an inner panel, the bearing structure of the object, while the outer case, with the unmistakable cylindrical shape designed by Valle is made of transparent polymethacrylate in the dial and thermoplastic in the back.

The operation is simple, perfect and ...unchanged since 1966: the periods of the alternating current are transformed into units of time and the motor, being synchronized with the mains frequency, generates the rotary movement of the rollers and vanes.

Today, just like 50 years ago, the mechanical perfection of Cifra 3 is born of the artisanal skill of the man who assembles vanes by hand, in a specific sequence.

Made in Web Industry